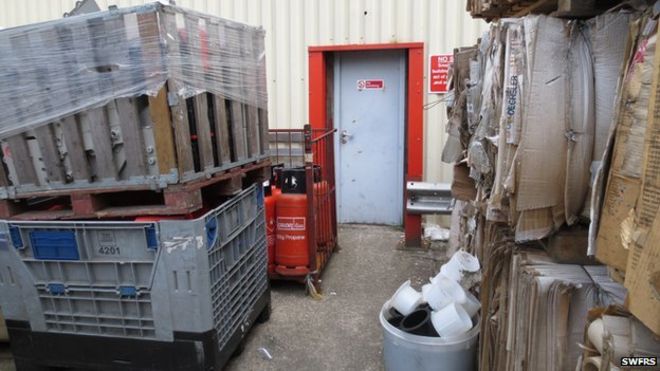 A £45k fire safety fine (the largest ever fine) handed to a Welsh company for flouting fire safety regulations has been given to a Torfaen recycling firm.

Cwmbran-based MDS Recycling was ordered to pay £45,000 plus £3,207 costs at Cwmbran Magistrates' Court.

South Wales Fire and Rescue Service brought the case after a visit by safety officers in July 2014.

The company faced nine charges, with prosecutors saying staff were at risk of death if a fire started.

An MDS Recycling spokesman said the firm regretted what happened and it currently complies with all regulations.

The company was visited at its Avondale Industrial Estate base as part of a risk-based inspection programme.

The court was told one fire exit was completely blocked by stacked recycled material, and the only other one available had LPG cylinders and combustibles stored by it.

Other offences included storing waste materials and LPG Cylinders inappropriately at the site.

It was also found the site was not fitted with an appropriate working fire alarm system or any emergency lighting.