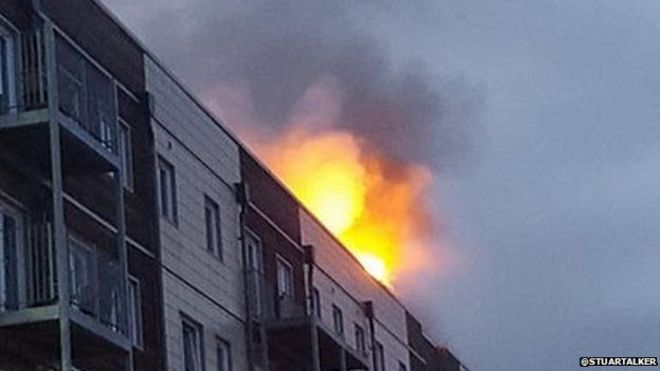 Dozens of families have been told they "may never be able to enter their homes again" after a major fire destroyed 60 flats in Wigan.

About 50 firefighters remain at the six-storey Wharfside block, on Heritage Way, after the blaze broke out on the top floor at about 04:00 BST on Sunday.

People living in 120 flats were evacuated, with many spending the night in a rescue centre or a local hotel.

All the residents were evacuated, with no injuries reported.

About 50 firefighters remain at the block of flats and flames and plumes of smoke could be seen from several miles away.

A rescue centre was opened at nearby arts centre The Mill at the Pier by Wigan Council.

Tejiri Onoyake, a resident, said: "It's a problem for almost everyone....cont